Solahart Commercial specialises in solar solutions for businesses large and small. We go to extreme lengths to ensure our systems provide you with worry-free, trouble-free energy for years to come. Don't not risk your solar investment. Talk to Solahart today.

Solahart Solar Power systems deliver unrivaled quality, performance and efficiency. By bringing together world-renowned solar panels and high-performance SMA inverters, you can be assured that you have a commercial solar power system that is second to none.

Solahart Solar Power systems deliver amazing savings to your business and are a great way to reduce electricity bills because of their superior efficiency and performance. Our Solahart Savings Calculator is an easy way to estimate the savings you’ll make. Also, by installing a Solahart Solar Power system, you could create a more sustainable business using an energy source that is clean and green.

High-performance SMA inverters
For over 30 years, SMA inverters have been the industry standard for the global solar power industry. That’s why we use them in our commercial solar power systems. All SMA inverters are manufactured using 40% less internal parts and more memory functions for greater performance and efficiency. Solahart’s three-phase inverters are setting new standards in inverter technology. The Sunny Tripower 15000TL 20000TL and 25000TL inverters are ideal for large-scale commercial and industrial plants. Not only do they deliver optimum solar yields with OptiTrac Global Peak shade management and an efficiency of 98.4%, but they also offer enormous design flexibility thanks to their multistring capabilities and wide input voltage ranges.

World-leading  panels
The harsh Australian environment demands quality solar power components. That’s why we use world-leading solar panels which are consistent with Solahart’s quality and performance requirements. Our panels are also a great choice for the environment.

1. Only with external NS protection

Solar power panels generate electricity from sunlight. The roof mounted solar panels are made up of many photovoltaic (PV) cells. These cells collect the sun’s light and convert the energy into DC electricity. This is fed through an inverter and converted to 240V AC electricity to power your home.

The amount of electricity you can produce depends on the number and efficiency of the panels, the size of the inverter and the amount of sunlight in your location. Your home remains connected to the electricity grid so when you generate more electricity than you need you can feed it into the grid or purchase more from the grid when you are not producing enough to meet your requirements. 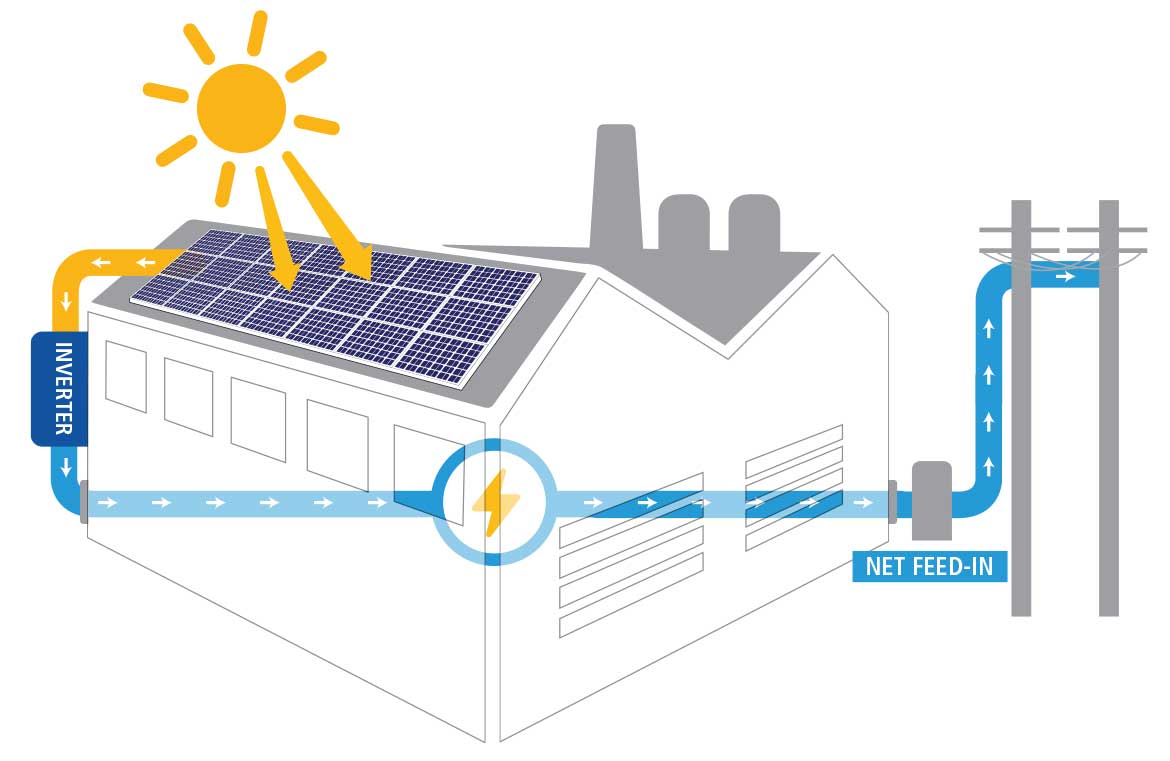 The amount of energy from the sun that falls on Earth's surface is enormous. All the energy stored in Earth's reserves of coal, oil, and natural gas is matched by the energy from just 20 days of sunshine. Outside Earth's atmosphere, the sun's energy contains about 1,300 watts per square meter. About one-third of this light is reflected back into space, and some is absorbed by the atmosphere (in part causing winds to blow).

By the time it reaches Earth's surface, the energy in sunlight has fallen to about 1,000 watts per square meter at noon on a cloudless day. Averaged over the entire surface of the planet, 24 hours per day for a year, each square meter collects the approximate energy equivalent of almost a barrel of oil, or 4.2 kilowatt-hours of energy every day. Deserts, with very dry air and little cloud cover, receive the most sun—more than six kilowatt-hours per day per square met 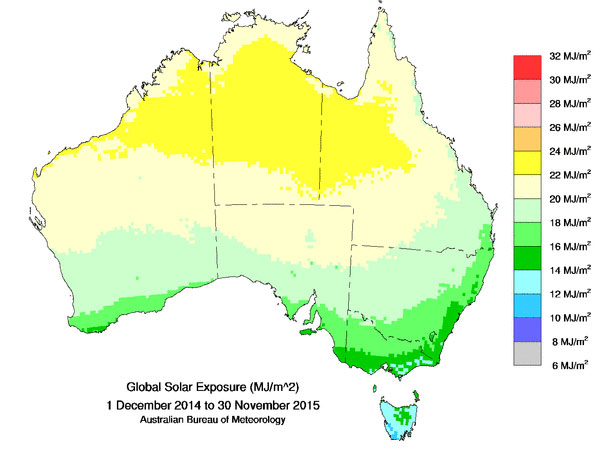 How does a solar cell turn sunlight into electricity?

The sun's light (and all light) contains energy. Usually, when light hits an object the energy turns into heat, like the warmth you feel while sitting in the sun. But when light hits certain materials the energy turns into an electrical current instead, which we can then harness for power. Solar technology uses large crystals made out of silicon, which produces an electrical current when struck by light. Silicon can do this because the electrons in the crystal get up and move when exposed to light instead of just vibrating in place to make heat. The silicon turns a good portion of light energy into electricity.

The most important components of a PV cell are two layers of semiconductor material generally composed of silicon crystals. On its own, crystallized silicon is not a very good conductor of electricity, but when impurities are intentionally added—a process called doping—the stage is set for creating an electric current. The bottom layer of the PV cell is usually doped with boron, which bonds with the silicon to facilitate a positive charge (P). The top layer is doped with phosphorus, which bonds with the silicon to facilitate a negative charge (N).

Most PV systems consist of individual square cells averaging about six inches on a side. Alone, each cell generates very little power (approximately four watts), so they are assembled together panels encased in glass and plastic to provide protection from the weather. These panels are either used as separate units or grouped into even larger arrays to form a solar power (PV) system.

The Solahart Solar Power system is comprised of two main components; a string or array of photovoltaic panels and an inverter. The photovoltaic (PV) panels transform solar radiation into electrical energy in the form of direct current (DC). In order to utilise this energy and feed it back into the grid, the direct current is transformed into alternating current (AC) by the inverter. This conversion is also known as DC to AC inversion.

The alternating current generated by the inverter is fed into the main switchboard, which in turn is connected to the electricity grid. If the energy generated exceeds that required by property demands, your electrical network operator may allow the difference to be directly injected into the grid and become available to other users. Energy injected into the grid can be measured by electricity network operators as either gross (everything generated) or nett (excess generated). Injected energy may or may not be purchased by the local electrical network operator according to national and local standards, and regulations. 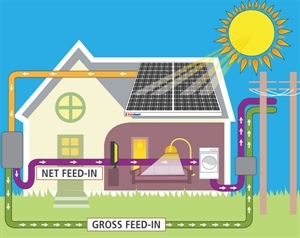 To maximize system output, install panels at optimum orientation and inclination (tilt) angles. The specifics of this will depend on the installation location and must be calculated by a qualified system designer. The ideal angle for mounting a panel should result in the sun’s rays falling perpendicular (i.e. at a 90° angle) to the panel surface.

Panels should be installed in a shade free position. Even minor or partial shading of the panels/array will reduce system output. A panel is considered shade free when it is both: 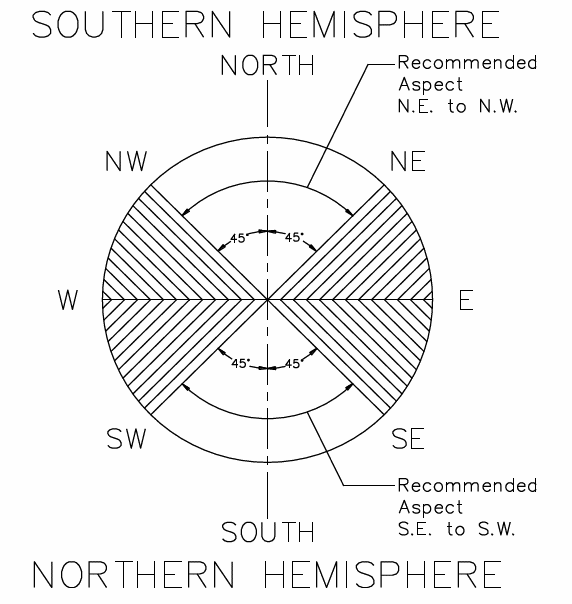